A dissemination database is a source that can be considered to be the official or 'authoritative' place to go for the data that it holds. NTLIS is in the process of establishing a number of dissemination databases, i.e. places where users (including applications) can assume that the data they are connecting to is current and will match the metadata record published in the NTSDD.

This document will describe the role of the dissemination databases and the connection details required by users wishing to connect to them.

For a list of datasets available in the NRETA and DPI dissemination databases visit the links at the bottom of this page.

Downloading data directly from the Dissemination Databases is only available inside the NT Government network. Users outside of government can gain direct access to the database, but must do so via the NTLIS Spatial Data Broker.

The dissemination databases are the primary data sources for the other components of the NTG Spatial Data Infrastructure (SDI), the framework for accessing spatial information across the NT government.

Standardising on a single repository for each particular dataset provides end users with a consistent view of that data. For example, attribute names and values are well defined and the limitations can be better understood.

Typically a dissemination database is easily accessible. Assuming the end user has the appropriate access credentials there should be no requirement for a 'human' custodian for the manual supply of data.

Datasets in the dissemination databases are known to have gone through the NT Government Spatial Data Publishing Checklist.

The data available in the dissemination database is not necessarily the working version from the custodians' point of view. Rather, it is the 'published' version. This is illustrated in Figure 1, where end users and their applications never connect directly to the custodian's version of the data. Instead data is published up into the dissemination area where it can remain consistent (all users get the same data model) and constantly available. This provides a level of security and ensure performance is maintained for the end users (by the provision of powerful dissemination hardware) and the custodian (by protecting them from end user queries). 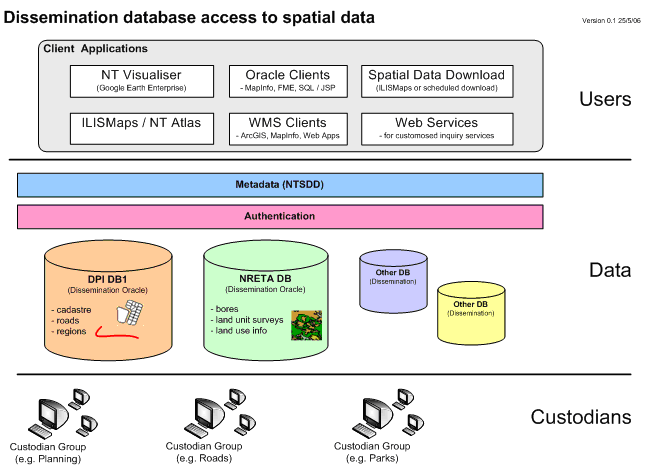 The diagram illustrates the constancy that the use of the dissemination databases will provide, with all users and applications of a particular dataset drawing on the information from a single source.

Licensing of data in the dissemination databases is as it always has been. Access is unrestricted within the NT government, but data license agreements must be sought if private organisations want to use the data.

All provision of spatial data to the public must be controlled by the custodian.

Currently the NTG departments DPI and NRETA are the only departments to have 'official' dissemination databases, according to compliance with the NTG spatial data checklist.

To see a list of the datasets currently available, use your favourite Oracle client (FME, MapInfo, Toad) combined with the connection details below. If you need any help contact GIS support on gis.support@nt.gov.au.

What data is available

The following are links to a live listing of all the layers and attributes available in the current DPI and NRETA dissemination databases,

There is a table in SDB1 called METADATA_LOOKUP that links the table name with the official metadata ID and metadata URL, so users can determine exactly what is contained in each table.

In addition, NTG government users are able to connect directly to the databases, assuming they have software that is capable of connecting to Oracle directly.. (e.g. MapInfo, FME or MS ODBC).

To connect directly to the oracle databases, you will need to ensure you have the Oracle Instant Client installed and configured on your PC, and the following in your TNSNAMES.ORA file. Contact GIS support if you have any questions about this process.

There are certain cases when information should be used in a live query sense, rather than the traditional download-and-store scenario. A good example of this is address searching.  Rather than downloading and maintaining a copy of the cadastre in order to implement address searching (geocoding) in an application, it may be better to design the application to make a query to a service for each particular address every time it is required. This ensures the data is always current and removes the need for the application custodian to have to maintain the address dataset.

An example of this in operation is the address searching in NT Visualiser and ILISMaps,  both applications connect to web services that return parcels matching an address criteria.

NTLIS maintains a Web Feature Service (WFS) performing this task for use inside government, information about the WFS specification is available at the Open Geospatial Consortium (OGC) site. The ILIS OwnerName Identification service is another example of a live-access dataset.

If there are any questions or suggestions please don’t hesitate to contact GIS Support.