NTLIS has developed a metadata authoring tool for use by spatial data custodians inside and outside the NT Government. The tool is web-based and produces metadata compliant with the newly released ANZLIC profile of the ISO 19139 metadata standard.

All users of spatial data are familiar with the need for quality metadata associated with the datasets they are using. One of the responsibilities of NTLIS is to promote good data management and use techniques, including the maintenance of quality metadata by data custodians. The standard for metadata describing geographic datasets recommended to be used in Australia has been through a couple of generations.

NTLIS have a pressing need for a metadata authoring tool as part of the Spatial Data Accessibility Project, (SDA) and hence have built one in consultation with experts around the country. The tool is used by spatial data custodians in the Northern Territory from both government and private sectors. The metadata created is (optionally) made available on the NT node of the Australian Spatial Data Directory (ASDD) and NT Spatial Data Directory (NTSDD). The NTLIS Metadata Tool produces metadata according to the new ANZLIC Metadata Profile. 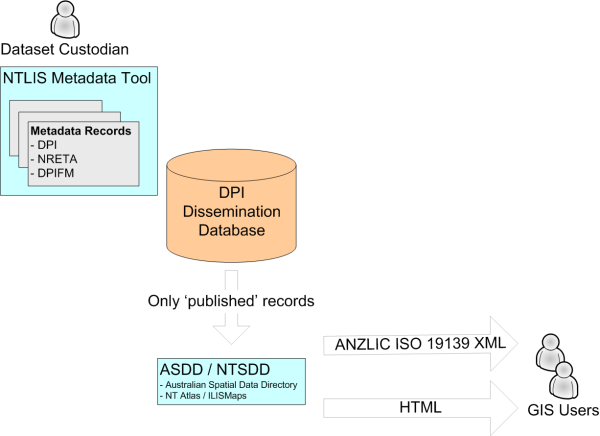 Storing metadata in a standard way ensures that a certain minimum of fields are captured, and makes it easier to transfer from one system to another, for example from an online catalogue to a desktop GIS application, or the reverse.

The NTLIS Metadata Tool produces metadata containing the fields identified by ANZLIC as being in the minimum ANZLIC Metadata Profile, plus those that were supported in the older ANZLIC 2.0 standard.

Fields that are mandatory according to the minimum ANZLIC Metadata Profile will be mandatory in the NTLIS Metadata Tool, the rest of the fields supported will be optional.

All records that have been marked as OK to publish will be made available on the NT ASDD node, allowing users on the internet to search and retrieve the records in either XML or HTML format.

The NTLIS Metadata Tool is accessed via a web browser, so there is no need to download software or install plugins in order to use it. It is based on the application development environment Oracle Application Express, meaning the metadata records form a spatial dataset themselves with the various fields as attributes and the extents as a geometries. This dataset will be available in the SDB1 Dissemination Database and can be added to a map and queried just like any other. Oracle Application Express is a free extension to Oracle Database 10g.

In addition to the fields described by the old ANZLIC format and new ANZLIC Metadata Profile we have included a data dictionary function. This information will not be included in the XML exports as they are not standard fields, but they will be included in the HTML (human readable) pages to explain what the various attributes and attribute code values mean. Data custodians can attach a data dictionary to a metadata record and user will use this to determine what, for example, the attribute TENURE_REFERENCE_TYPE represents on the CADASTRE dataset, and what it means when its value is F.

Access is granted via a username / password combination. A user is associated to a particular custodian, (e.g. Department of Planning and Infrastructure / Charles Darwin University) and that user will only be able to edit and delete records belonging to their organisation. All records created by that user will be automatically attributed to that custodian.

Validation can be performed by the metadata author at any time, this ensures that all the required fields have been completed satisfactorily. Optionaly, valid records can be published to the ASDD / NTSDD by checking the 'Publish' option. This allows users across the NT, Australia and the world to discover the metadata record and contact its owner to obtain the data it represents.

The address of the NTLIS Metadata Tool is:

Any questions relating to the tool should be directed to gis.support@nt.gov.au.